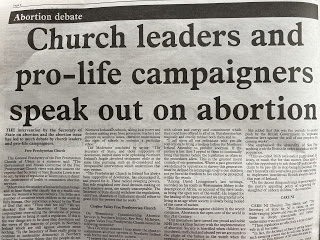 As a Christian minister I hear about the plans to commission abortion services in Northern Ireland with horror and incredible sadness.

I believe the proposal to decriminalise abortion should have been considered by our representatives within the Northern Ireland Assembly, health being a devolved matter.  Likewise the intended commissioning of these services should be a matter solely for the devolved administration.  The Northern Ireland Executive’s division on this matter reflects the divisions within Northern Ireland society on this profound issue.

The politicians from within the Northern Ireland Assembly and at Westminster who advocate abortion wilfully ignore the hundreds of thousands within this part of the UK who object, as the consultative process last year demonstrated.I object to abortion and the intention to commission abortion services in Northern Ireland most vociferously.My grounds for objection is based upon the humanity which the foetus has inherited from conception; a humanity which the unborn shares with those who have been born.  If killing of children after birth is a crime, then killing prior to birth is also a crime.  Biblically and morally there is no distinction between the humanity of a foetus and a new born baby apart from the fact that the foetus is enclosed and nurtured within the safety of the mother’s womb.Abortion is often packaged as a being a health care matter for women.  From the moment a woman becomes pregnant she becomes a mother.  Therefore it is not in the interests of a woman’s health for her to abort her baby.  There are psychological and moral implications when a mother chooses to terminate her pregnancy. Abortion is described as pro-choice…that a woman has the right to decide what happens to her own body.  This is a red herring.  Do any of us have the right to mutilate our own bodies?  It would be entirely unethical for the NHS or a private health practice to assist us in self harm.  Therefore no-one has the right to do what they please with their bodies if it is harmful or injurious.  On this logic it is equally wrong to choose to deprive the growing infant within the womb, of the most sacred of all rights – the right to life.  I often reflect upon the enormous loss to society…the thousands and millions of people deprived of life with talents and energy and commitment which they could have offered to all of us.  But abortion has tragically and cruelly robbed both them and us.  I call upon all our politicians with pro-life convictions to bring a motion before the Northern Ireland Assembly to prohibit abortion.  If the motion is lost then I appeal to them to continually bring this matter before the legislature as often as the procedures allow.  This is the greatest moral crusade of our generation.  Where a past generation was defined by opposition to slavery this generation must be defined by a campaign to give our children not yet born the freedom to live and to be protected within the womb.  Among David Livingstone’s last writings, recorded on his tomb in Westminster Abbey is the description of Africa, on account of the slave trade, as being “the open sore of the world”.  He longed for the healing of the open sore and we are grateful to be living in an age when society is slowly being healed of the curse of racism.  But discrimination against children in the womb continues.  Abortion is the open sore of the world in this 21st Century.  Our lawmakers have turned our proud and noble NHS into a killing factory with the implementation of abortion.  Society is horrified when children are murdered, trafficked and abused yet we are numb to the plight of the babies in the womb when the pregnancy is ‘terminated’.  The world continues to be traumatised by the Nazi death camps as those deemed weak and unfit for life were exposed to the ‘final solution’, yet we turned a blind eye and many chose to justify the slaughter of the innocent known as abortion.  I have the greatest of sympathy for women who feel that this is their only option.  It is our lawmakers, our medical ethics and the attitude of millions in society which have made this tragic choice possible.  Abortion is a societal issue and as a society we share in the collective guilt.  But to those women whose circumstances are bringing them to the place where they feel this tragic choice must be made I say – STOP…there are other options…there is help and support…there is a positive, loving and caring alternative BUT abortion is not the solution…not for you and not for your baby.
To those who are living with this tragic choice feeling and experiencing the guilt – I bring a message of comfort.  Bring your confession to God, He is forgiving, He will hear you and bring peace to your troubled soul.I pray for God’s mercy and for an end to this cruel practice.
Peter McIntyre
23rd March 2021