THE GOD OF ALL GRACE IN THE LIFE OF JOB 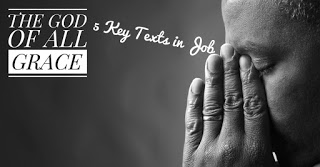 “I have heard of thee by the hearing of the ear: but now mine eye seeth thee. Wherefore I abhor myself, and repent in dust and ashes.”

This is our final key text in the Book of Job.

After a protracted period of conversation between suffering Job and his friends, Eliphaz, Bildad and Zophar, and after Elhiu the younger man entered the discussion God came and revealed Himself in all His power and glory.

This is both a transforming moment and a turning point in the experience of Job.  His thinking is altered and life is turned around by the appearance of God.

Job was not the only one who was changed when God came, but the other four men were also taught invaluable lessons, especially Eliphaz, Bildad and Zophar.

These men had talked and reasoned in their attempt to understand the mysteries of providence.  This is the question of the ages – Why good people are called to suffer?  As all humans do when attempting to comprehend the incomprehensible – they went round in circles.  How many times have we not talked and debated issues and after hours of discussion found ourselves no further forward?  When God appears, however, everything makes sense, even though we still do not understand His dark and mysterious ways.  Only when we are humbled before God can we move forward.

Job needed a new beginning after his descent from happiness and prosperity to sorrow and bereavement.  This new beginning only took place when God revealed Himself to His servant.

Let us apply this to our immediate circumstances in the light of the Covid-19 pandemic.

Some have attempted to claim with great certainty that this is the judgement of God upon our world for the moral wickedness that abounds.  I do not say the world does not deserve judgement; but I do say that we deserve as a society much more than Covid-19.  If we argue that each terrible event is the specific judgement of God then we need to face the suffering that happens every day in all kinds of scenarios – suffering from which none of us are immune.  Suffering is not always judgement for specific events; if it were God becomes caricatured as a vindictive ogre, rather than a God of grace and mercy.  We ought to be careful with the manner in which we portray God to the world if we continual focus on the wrath of God without balancing His nature in a biblical manner – because He is also a God of longsuffering, of goodness and forgiveness.

Others have gone down the conspiracy theory route – that the death rates are not what they all seem.  This pandemic is a stage-managed production by the globalists who want to lead us closer to a one world Government.  Some have even described it as dress rehearsal for the arrival of antichrist!  Such foolish talk ignores the fact that health services across the world have been overwhelmed with the sheer numbers of seriously ill people.  Covid-19 has not been a phoney illness.

Among the unbelieving world conspiracy theories abound among those who see China as deliberating inventing the virus to order to move ahead of the West in power and prosperity.  There was the rather crazy notion that was mooted that 5G masts were transmitting the virus into Europe.  Some have even claimed that this is another desperate attempt to overthrow President Trump in the wake of the failed attempt to have him impeached.

The world at large places a heavy reliance upon science to get us out of the pandemonium that Covid-19 has brought upon the world.  The differentials in the lockdowns across the world and the variations in how the virus has affected nations has shown that science cannot supply all the solutions.

Both believers and unbelievers, the Church and the world have been guilty together of running around in circles looking for reasons, seeking solutions, attempting to make sense of this situation in which we all are involved.

The truth is – we cannot make sense of the world because no man of woman is God.  Only He knows the end from the beginning and His ways are unfathomable.

An unbeliever may well read this and accuse the writer of a cop-out.  If we are challenged to explain something, they say we blame God and by claiming that He knows best.  I certainly do not blame (because the word blame carries with it the implication of condemnation) but I accept that God has decreed every event that comes to pass and that He works His purpose out through it.  I rest on this and this brings peace to my soul.

When God visited Job, the man of God was taught this truth in a most demonstrative way, and therefore was made ready for a new beginning.

Job was not sinless.  He had got things wrong, as had His friends.  Therefore, he needed correction.

We too need a new beginning.  If a man like Job, who rose to the incredible heights of faith when facing bereavement, loss, ill health, betrayal and  condemnation needed correction – how much more do we?

We need to be corrected by the most high God.  When He visits us everything changes.  This was Job’s experience at the end of his story.  May it be ours likewise.

“I know that thou canst do everything, and that no thought can be withholden from thee. Who is he that hideth counsel without knowledge? therefore have I uttered that I understood not; things too wonderful for me, which I knew not.”

When faced with His Creator, whose power and wisdom are fundamental to the world and the universe Job recognised the futility of his own reasoning and logic.  He confessed that He ought to have said nothing, even when accused by His friends.  Rather he ought to have waited on God.  A most vital lesson we all need to learn in our rush to either defend ourselves or accuse others!

As he was given this new experience with God he is described as abhorring himself and repenting with dust and ashes.  Job already knew God, he was a valued and highly commended servant of God.  Yet there was so much more of God for him to discover.  So, it is for us – let us seek more of His presence that we might be humbled before Him.

“And it was so, that after the Lord had spoken these words unto Job, the Lord said to Eliphaz the Temanite, My wrath is kindled against thee, and against thy two friends: for ye have not spoken of me the thing that is right, as my servant Job hath…And the Lord turned the captivity of Job, when he prayed for his friends”.

It appears that Eliphaz, Bilbad and Zophar did not react with humility, as Job had done, when God appeared.  Why this was the case we cannot be sure but we do know that this brought about God’s disproval.

There is no doubting that the way in which these men had treated Job, in his suffering was wrong.  They accused him of sin, of hypocrisy especially, and insisted that God was judging him.  Despite these glaring failings, these men still did not admit their faults and humble themselves before the glory of God.  They tenaciously clung onto their opinions with an air of stubborn pride.  If Job had admitted his fault in the affair, these men had more reason to request forgiveness.

These men had sinned against God, they had certainly wronged Job and they remained fixed in their arrogant ways.  But before God would reverse Job’s circumstances it was important that he prayed for his failing and offensive friends.  I can imagine some Christians when challenged with this kind of situation refusing to pray for those who had treated them in such a cruel fashion.  But God does not want us to hold spite and bitterness against our brothers and sisters.  He wants us to settle our differences at the throne of grace.  It is a credit to Job that he rose above the selfishness and stubbornness of his friends – he claimed the higher ground on his knees before the God of Heaven.  Blessings flow from God to those who have the capacity to forgive.

“Confess your faults one to another, and pray for one another, that ye may be healed.  The effectual fervent prayer of a righteous man availeth much”.

“Then came Peter to him, and said, Lord, how oft shall my brother sin against me, and I forgive him? till seven times? Jesus saith unto him, I say not unto thee, Until seven times: but, Until seventy times seven.”

3:  His Acceptance by God

“And the Lord turned the captivity of Job, when he prayed for his friends: also the Lord gave Job twice as much as he had before.”

Job now had a life to rebuild.  This would involve much by way of industry and sacrifice.  We should not imagine that the events of the latter part of Chapter 42 took place over a few days or months.  But life went on and Job accepted the challenge as a man who had an encounter with God.  He regained acceptance by his family, the Lord replaced the loss of his children and his flocks and herds were replenished.

Our nation is facing the deepest recession in history.  The economic impact of this pandemic will perhaps not be fully realised until the end of the year.  We have read of The Great Depression years in the 1930s and it is very possible that we will pass through a similar period.

Like generations before us we will have to play our part in rebuilding the British nation.  This presents challenges for individuals, families, small and medium businesses, large companies as well as political leaders.

But the lesson from Job is – that an encounter with God provides the strength for the task that lies ahead.  God is able to recover our national prosperity and restore our economic fortunes, BUT will he do it for a people who have turned against Him?  He may well do because He is merciful and good and kind.  He may also turn the tide that overwhelming our nation in response to the prayers of His people.  The world may not realise it, but the people of God are the best and the most valuable resource in any nation – the salt of the earth.  But if God were to reveal Himself and bring our nation collectively to its knees we would truly be on the way to recovery.

Britain rose from being island on the edge of Europe to an international superpower which ruled the waves after the Protestant Reformation, the greatest revival since Pentecost.  Britain similarly has been in steady decline in the Post World War Two Wars; years in which we have nationally lost our way immersed in the quagmire of secularism which offers us nothing but failure.

Let us pray that God will come as He came to Job who was suffering and sorrowing amid the ashes of failure.  That we would turn from our wicked ways, seek the Lord and then He will heal the land.

Only then can we look forward to the future with a sense of optimism.  God gave Job in his latter days more than he had in his beginning.  He did fulfil the word that Bildad spoke – words that we can claim for tomorrow for our homes, our church, our business and our nation if we will but trust and obey:

“Thou thy beginning was small, yet thy latter end should greatly increase”